This exhibition and catalogue, which originated in a smaller-scale precursor exhibition in Pittsburgh and then at fuller scale in Zurich, has now its latest instantiation at the Deutsches Architekturmuseum in Frankfurt. It presents a fascinating précis of Gabriela Burkhalter’s longstanding research into the history of playgrounds, as well as a rich and diverse set of materials including photographs (often documenting no-longer extant sites), occasional and book publications, newspaper articles, biographical data about the architects, and pertinent theoretical statements.

From Rousseau and the romantics, to the educational reformers of the later 19th– and early 20th-century, to the modernisation of child-rearing and pedagogy after World War Two and especially since the 1960s and 70s, attitudes towards childhood have served as a crucial index of larger social anxieties and, often, of social ideals and aspirations as well. As this exhibition makes clear, the design of playgrounds interface with changing conceptions of cities, on the one hand, and on the other reflect various tacit—though also sometimes quite explicit—ideas about children: their creativity, their capacity to learn and grown, and their self-formation through interactions with each other around spaces and objects of play.

Playgrounds relate in complex ways to the domain of labor, and the activity of play should be seen as contextualized by the contrasts and overlaps between labor and children’s activities, and by the perspective of the child’s socialization as leading, eventually, to its capacity for adult productive work. In fact, not accidentally, playgrounds first arose to address the social problem of unproductive and potentially dangerous “free time” for children and youths who, through social reform of industry and the introduction of new labor laws, were increasingly protected against child labor and mandated to attend school. 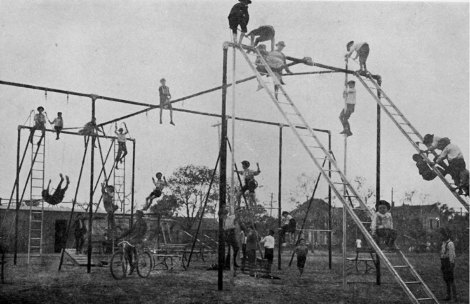 As Burkhalter writes, “As child labor began to be regulated at the beginning of the 20th century, the issue of what children should do with their free time grew more and more urgent, with many children in the working class being completely unsupervised during the day” (14).

Because of children’s existence as future workers-in-training and because of the association of child’s play with domestic labor and leisure, playgrounds almost necessarily carry a figural index of capitalist work-processes, whether represented affirmatively or critically or in a utopian mode. One might say that playgrounds are, among other things, the dialectical images of the evolving factory and office—even as high-tech offices of Silicon Valley have taken playgrounds into the workplace, outfitted crayons, foam balls, games, and open spaces for relaxation and imaginative enactments.

The catalogue / exhibition offer a wide range of ways in which playgrounds might figure relations to the adult work world: the standardized equipment  of Robert Moses’s playgrounds as the play-reflex of Fordist labor; the mimetic interactions of children with industrial materials in Carl Theodor Sørensen’s Skrammelegeplads (“junk playgrounds”) and the “adventure playgrounds” inspired by Sørensen;

Colin Ward’s conscription of children’s constructive free play to anarchism in the “Adventure Playgrounds: A Parable of Anarchy” special issue of the journal Anarchy in 1961; 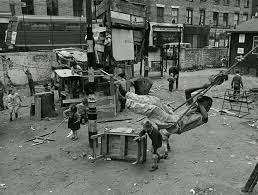 the autonomist notes of Riccardo Dalisi’s communal explorations of “technica povera” with the inhabitants of an impoverished peripheral development in Naples-Rione Traiano;

and the activist and actionist orientation of the German KEKS (Kunst, Erziehung, Kybernetik, Soziologie) group, which encouraged children to intervene in shaping the urban environment as well as play with technologies of cultural production such as photography, film, and sound recording.

Besides these mediated figural relations to the adult labor system, playgrounds also express explicit class dimensions related to their location and their social instrumentality as urban services. As Xavier de la Salle, one of the principals of the Group Ludic, notes in an essay included in the catalogue: “For us, the ‘real terrain” was composed of tough urban neighborhoods and housing projects in which cities where varied local life was dying out in the name of mono-functionalism, stupidly applied by designers who waved the Athens Charter” (236). The playgrounds of Group Ludic can thus be seen as interventions into the spatialized class structure of post-war French society, in which the children of the working class and immigrants were being warehoused in modernist high-rise projects trumpeted as the latest in rational urbanism.

Similarly, “The Park Project” (2008-2009) conducted by Sreejata Roy for the renewal of a garbage-laden open space as a public park and play space in Dakshinpuri, New Delhi highlights the spatial distribution of poverty in global supercities. Among the ways class inequalities are manifested in everyday experience are through the failure to provide basic urban services such as sanitation, deficient outfitting and maintenance of common spaces, and the degradation and impoverishment of the physical environment in which the poor are forced to live.

The other major historical context of playgrounds that the exhibition highlights is that of 20th-century total war, which erased the boundaries between front line combat and the home front, culminating in the destruction of cities through massive aerial bombing. Notably, the original “adventure playground” was established in Denmark under Nazi occupation, although its appropriation of waste industrial materials was associated with a new housing development. Marjory Allen, however, who imported the “adventure playground” model to Great Britain, had been a wartime activist for the evacuation of children from cities and the making of toys from materials at bomb sites. Following the war, she continued to engage for the child-victims of war, the staggering numbers of displaced, unhoused, orphaned, and impoverished children throughout Europe that the war had left behind. Her ethical commitment to children in war should be seen as relevant background to her attempts in Great Britain to establish adventure playgrounds on former bombing sites, thus positively reappropriating the sort of play-behavior among rubble she may easily have observed during the wartime bombing of Britain. Arguably, too, Aldo Van Eyck’s spectacular construction of hundreds of urban play spaces woven into Amsterdam’s urban fabric starting in 1947 should also be seen in relation to World War II, since it was the deferred realization of social democratic aspirations interrupted by the Nazi occupation of Holland.

The most powerful connection of playgrounds to the trauma of war, however, was in Japan, where, as Vincent Romagny writes in his catalogue essay, the impetus for a rapid development of playgrounds was “concern both for the regeneration after the destruction and for the prevention of potential future scenarios” (267). He notes too a direct influence of the wartime experience of the architect Mitsuru Senda on his celebrated playground designs. As Romagny notes, he drew upon “his own memories of childhood games in the tunnels for protection against American bombing dug into Yokohama hillside by the people of Japan” (272).

Children are the living future of any society. According to how we envision that future, their play spaces may be invested with an overdetermined set of collective fears, wishes, and hopes, extending all the way to utopian imaginings of a better society that child’s play would seem to prefigure. Playgrounds are thus, however, as this exhibition and catalogue clearly shows, anything but untroubled idylls. Viewed in historical retrospect, they are the afterimages of disruptive historical forces, including the violence of war and the social and technical transformation of work that have characterized the 20th century. And, not far beneath the gleeful cries of children playing, we hear disquieting notes about the future they will inherit as adults.